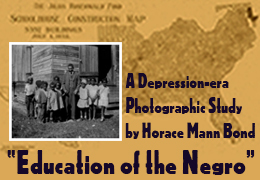 The Russell B. Russell Library for Political Research and Studies is proud to host the exhibit “Education of the Negro: a depression era photographic study by Horace Mann Bond” featuring over eighty photos from Bond’s field study of black student achievement. Opening on January 18, 2019, in the Harrison Feature Gallery at the Richard B. Russell Building Special Collections Libraries, the exhibition, curated by Gallery L1, Atlanta, offers a glimpse into the lives of African American children in the 1930s.

In 1929, Dr. Horace Mann Bond, a social science researcher and college administrator, began a two-year study of black schools and student achievement in Alabama, North Carolina, and Louisiana. Bond visited more than 700 African American schools administering standardized tests to nearly 10,000 students. Sponsored by the Julius Rosenwald Fund, the study explored poverty and race relations in the rural Jim Crow South. Rosenwald hoped to show that the students in these segregated schools exceeded educational expectations despite the lack of resources that were available to white students and gain support for his “Rosenwald Schools.” Dr. Bond, however, according to his son James, “was hoping to prove that it’s environment, that if you give people the opportunity, they’ll achieve,” regardless of their circumstances.

The photographs taken during this study went undiscovered until James Bond found the negatives in his family’s home and brought them to Atlanta printer Barry Blackwell. Years later, Blackwell approached James Bond and Gallery L1 about a show. The negatives were originally intended to be contact printed for postcards. The photographs tell a story about Horace and his wife Julia Bond's quest for justice as well as evidence of their life’s work--proving success is the result of nurture not nature. Children, when afforded the opportunity, will not only survive but thrive. Ultimately, the Bond’s work provides a compelling case in the ongoing debate over equity in education in the United States as closing the achievement gap remains at the forefront for parents, teachers, and policymakers.

“Education of the Negro” will be on display until March 25 in the Harrison Feature Gallery of the Richard B. Russell Building Special Collections Libraries, 300 S. Hull Street. The Special Collections building is free and open to the public from 8 a.m. to 5 p.m. Monday through Friday, and 1-5 p.m. on Saturdays. The building is closed on home football game days and University holidays. The Russell Library will be hosting a program on Rosenwald schools on the afternoon on Saturday, February 23, follow us online at http://www5.galib.uga.edu/russell/ for more details.

The Russell Library welcomes requests for special tours by campus and community organizations, and groups. For more information about the exhibit, please contact Kaylynn Washnock at 706-542-5788 or washock@uga.edu. To schedule a tour of the Special Collections Libraries Galleries, contact Jean Cleveland at jclevela@uga.edu or by calling 706-542-8079.