When the front page gets to be too much, newspaper readers often find relief by turning to the editorial page to glimpse the humor in often stressful situations through cartoons.

Some of the best examples of editorial cartoons commenting on war, politics, and daily life in the first half of the 20th century will be on display at the UGA Special Collections Libraries, beginning Sept. 1. 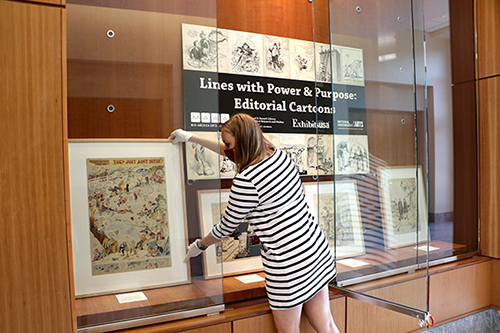 The Richard B. Russell Library for Political Research and Studies will host the exhibit Lines with Power and Purpose: Editorial Cartoons, displaying 51 original editorial cartoons from the nation’s metropolitan newspapers during the Golden Age of print journalism.

The exhibit features six Pulitzer Prize-winning cartoonists, and to celebrate the work, the Russell Library will host a conversation with Mike Luckovich, who has garnered two Pulitzer Prizes for his editorial cartoons published in the Atlanta Journal-Constitution. The event, moderated by Joseph Watson, Carolyn Caudell Tieger Professor of Public Affairs Communication at UGA’s Grady College of Journalism and Mass Communication, will be held at 5:30 p.m. Tuesday, Sept. 28 in the Special Collections Libraries. 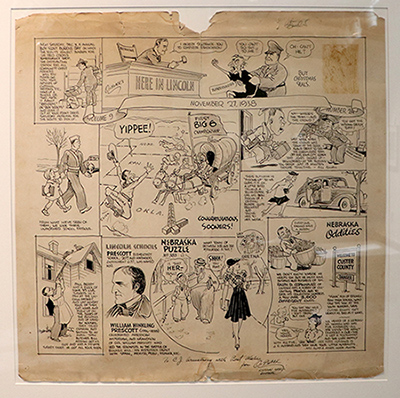 “Editorial cartoonists have a knack for capturing the crux of the news or issues with just a few images and words in a manner that can cut through the politics, sway opinions, or provide a little comic relief,” said Sheryl Vogt, director of the Russell Library. “There is an art to that storytelling, and we invite the community to explore some of the very best cartoonists featured in this exhibit.”

This exhibition, organized by ExhibitsUSA, a program of Mid-America Arts Alliance, includes the work of Pulitzer Prize winners for editorial cartooning Bruce Alexander Russell, Herbert Lawrence Block (Herblock), Charles G. Werner, C.D Batchelor, Charles R. Macauley, and Vaughn Shoemaker. The pieces are on loan from the Melton Gallery at the University of Central Oklahoma, curator of the exhibition, and will remain on display through Oct. 5. 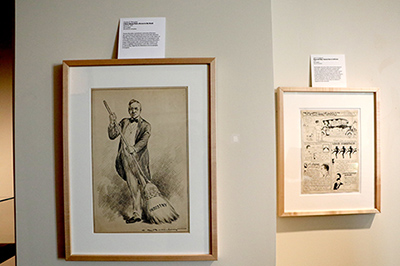 The galleries at the Special Collections Libraries, located on the University of Georgia campus in Athens, are open from 8 a.m. to 5 p.m. weekdays, with extended evening hours until 7 p.m. on Tuesdays and Thursdays this fall. For more information, or to schedule a tour, visit libs.uga.edu/scl.

The community also is invited to join the Russell Library for a virtual tour of the exhibit. The event will be held via Facebook Live at 2 p.m. Sept. 23.