Books that explore how historic government policies on voting rights and reparations have marginalized Black communities are the 2021 recipients of the Lillian Smith Book Awards, administered by the University of Georgia Libraries to honor books dedicated to social justice issues.

This year’s honorees include From Here to Equality: Reparations for Black Americans in the Twenty-first Century (UNC Press), written by co-authors William A. Darity Jr. and A. Kirsten Mullen, and On Account of Race: The Supreme Court, White Supremacy, and the Ravaging of American Voting Rights (Counterpoint Press), by Lawrence Goldstone. The works will be recognized during a virtual award ceremony this September. 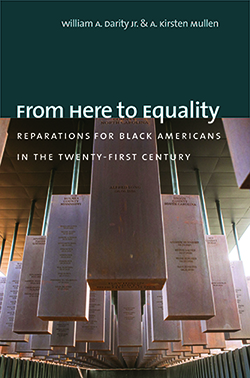 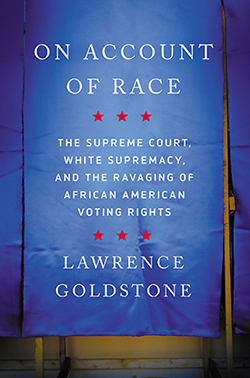 “This year’s Lillian Smith Book Award recipients offer timely explorations of far-reaching social justice issues,” said Toby Graham, university librarian and associate provost. “Along with our partners at the Southern Regional Council, the Georgia Center for the Book, and Piedmont College, we are pleased to recognize these writers’ scholarly achievements.”

Darity, Samuel DuBois Cook Professor of Public Policy, African and American Studies, Government and Economics at Duke University, teamed up with Mullen, a folklorist and accomplished museum and arts consultant, to write From Here to Equality: Reparations for Black Americans in the Twenty-first Century (UNC Press). The book traces the economic inequalities of the 21st century to government decisions after the Civil War, including policies that withheld reparations and compensation from freed Black Americans following the abolition of slavery, as well as the federal government’s investments in white Americans during Reconstruction. Through their analysis, Darity and Mullen make the case for modern day reparations.

In his book, On Account of Race: The Supreme Court, White Supremacy, and the Ravaging of American Voting Rights (Counterpoint Press), Goldstone demonstrates how U.S. Supreme Court rulings undermined efforts in the 14th and 15th Amendments to provide equal protections and voting rights to Black Americans after the Civil War and opened the door for Jim Crow laws in the 20th century. A constitutional law historian who has written more than a dozen books, Goldstone analyzed court cases and rulings to trace the history of legal voter suppression, uncovering a tradition of white supremacy.

“These authors have documented untold historical, legal, and economic stories that can inform us as we work toward a more just society today,” said Merryll Penson, former executive director of library services for the University System of Georgia, who served as a juror for this year’s awards. “It is our hope that the Lillian Smith Book Awards can bring further attention to these societal disparities, rooted in racial injustice, and help in the struggle to right these wrongs.”

Named after the acclaimed author of the controversial 1944 novel “Strange Fruit” and other works, the Lillian Smith Book Awards recognize works that examine issues of race, social justice, civil and human rights, the education and socialization of young people, breaking silence among repressed groups and matters that are significant to the changing South. The awards have recognized books by leading academics such as Henry Louis Gates Jr., activists like John Lewis, novelists from Tayari Jones to Eudora Welty, and other writers, such as poet Natasha Trethewey.