Georgia HomePLACE, the Digital Library of Georgia (DLG), and the Augusta-Richmond County Public Library System are pleased to announce the addition of over 10,000 digitized pages of African American funeral programs to the Augusta Public Library’s Eula M. Ramsey Johnson Memorial Funeral Program Collection.  Spanning 1933-2017 and consisting of over 3,000 programs, the digital collection provides both a rich source of genealogical information and local history about the African American community. Programs are freely available online through the DLG. 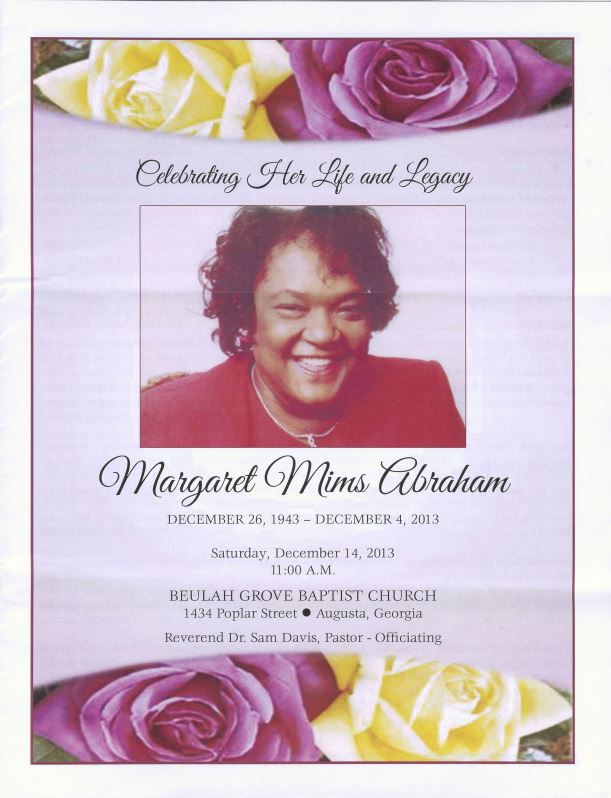 The current project more than doubles the total number of programs originally available in the digital collection. In 2009, HomePLACE and the DLG digitized the approximately 1,000 funeral programs available in the Georgia Heritage Room of the Augusta-Richmond County Public Library System. The bulk of the collection was donated in the early 2000s by local historian Gloria Ramsey Lucas. An avid genealogist and former president of the Augusta Genealogical Society, Ms. Lucas is known for her award-winning work, Slave Records of Edgefield County, a compilation which came about during her own search for enslaved ancestors. The donated funeral programs belonged to her aunt, Eula M. Ramsey Johnson, who had been collecting them for over 30 years and for whom the collection is named.

“Family history researchers are familiar with common vital records rich in genealogical data--such as birth, marriage and death certificates--and frequently exhaust these resources in their ancestral search,” says HomePLACE Director Angela Stanley. “Though often difficult to find, funeral programs can provide critical information about a person's relationships, character, community ties and social prominence that coroner's reports and death certificates cannot. These context clues become all the more precious when we consider that genealogists researching African American lineage are frequently told the work cannot be done. Yet what we often find is that when the right records come to light, the people behind them do, too.”

A majority of the programs are from churches in Augusta, Georgia and the surrounding area, with a few outliers in other states such as New York and Florida. The programs typically contain a photograph of the deceased, an obituary, a list of surviving relatives, and the order of service. The collection provides extensive genealogical information about the deceased, including birth and death dates, maiden names, names of relatives, past residences and place of burial. Many of the people included in this collection were prominent in their communities and involved locally in the struggle for civil rights. In 2010, the collection was honored with a Georgia Historical Records Advisory Board Award for Excellence in Documenting Georgia’s History.

Says Georgia Heritage Room Librarian Tina Monaco, "This award-winning collection has truly been, from its inception, a community-driven endeavor.  The digital collection offers a much-needed resource to those researching African-American family and social history."

Georgia HomePLACE http://georgialibraries.org/homeplace is a project of the Georgia Public Library Service (GPLS) that encourages public libraries and related institutions across the state to participate in the Digital Library of Georgia. HomePLACE offers a highly collaborative model for digitizing primary source collections related to local history and genealogy. HomePLACE is supported with federal Library Services and Technology Act (LSTA) funds administered by the Institute of Museum and Library Services through GPLS, a unit of the Board of Regents of the University System of Georgia.

Based at the University of Georgia Libraries, the Digital Library of Georgia http://dlg.galileo.usg.edu/ is a GALILEO initiative that collaborates with Georgia's libraries, archives, museums and other institutions of education and culture to provide access to key information resources on Georgia history, culture and life. This primary mission is accomplished through the ongoing development, maintenance and preservation of digital collections and online digital library resources. DLG also serves as Georgia’s service hub for the Digital Public Library of America and as the home of the Georgia Newspaper Project, the state’s historic newspaper microfilming project.