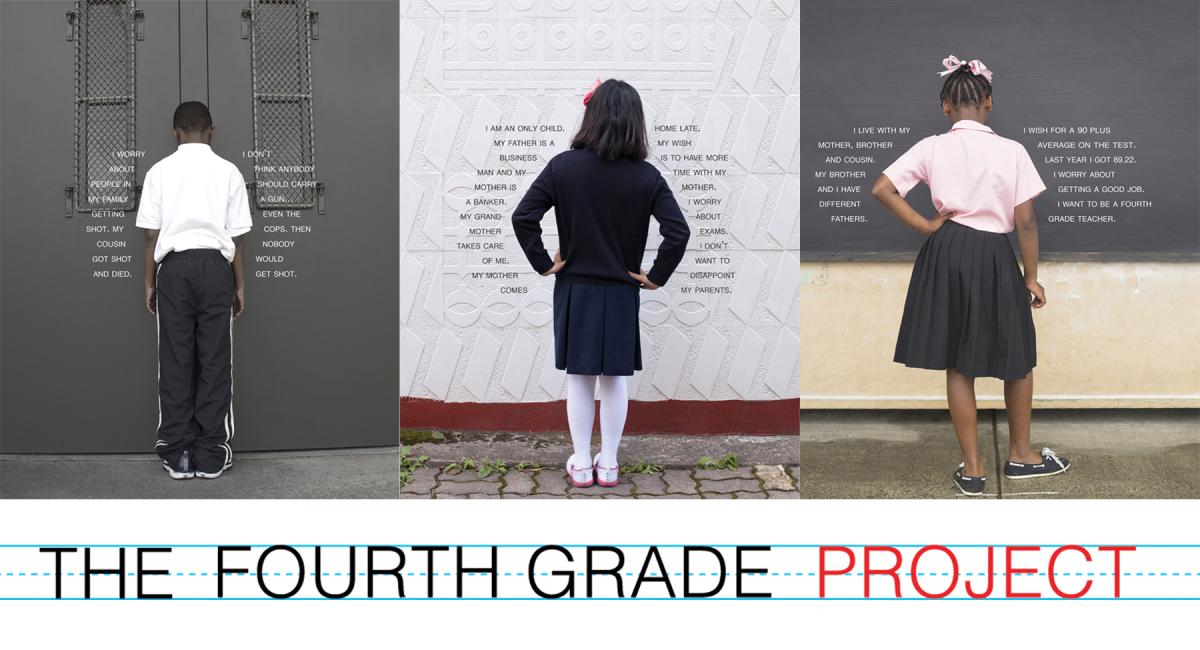 In the past decade, acclaimed artist Judy Gelles interviewed and photographed more than 300 fourth-grade students from a wide range of economic and cultural backgrounds in China, England, India, Israel, Italy, Nicaragua, St. Lucia, South Africa, Dubai, South Korea, and multiple areas of the United States. She asked all of the students the same three questions: Who do you live with? What do you wish for? What do you worry about? Their varied stories touch on the human condition and urgent social issues. In 2015, Gelles talked about the photographic series at TEDxPenn.

The students’ stories capture the gamut of societal issues that we face today: violence, immigration, the demise of the nuclear family, global hunger, and the impact of the media and popular culture. The combination of frontal and reverse portraits allowed for the development of both personal and universal stories and derived from the subject care-taker’s reactions to photography in each country. In the US, photographing from the front can be problematic because of privacy issues. In China, it is considered disrespectful to photograph from the back. In India, parents and teachers made no objections to either frontal or back portraits. In all of the portraits across the spectrum of countries, the children are presented as individuals; however, their stories speak to greater pervasive truths and problems within our society. Told in their own words, these children’s stories touch on some of our most pressing social issues and common human experiences.

“A notable commonality across all schools is that every group of fourth-graders has very little contact with or knowledge of people from cultural or socioeconomic backgrounds different than their own. Nine-year-old children are on the cusp of adolescence. They are able to think critically and consider relationships to be very important. They are socially conscious, interested in helping others, and openly curious about the world. It is also a moment in children’s development when worldviews start to become entrenched and paths for the future start to become more set. The project allows students to learn about others’ lives in a uniquely personal way and to use the project as a catalyst for their own explorations.” Gelles said.

The Fourth Grade Project connects viewers locally and globally, bridging cultural differences by fostering a strong, tolerant, and global student community. The project helps to decrease isolation and prejudice while asserting that every person’s story matters. The exhibition is accompanied by interactive resources for museum educators and teachers, with lesson plans and programming ideas focusing on global understanding and tolerance.

Judy Gelles (1944–2020) received her MFA in photography from the Rhode Island School of Design and her Masters in Counseling from the University of Miami. She had a long-time focus on themes of family and children, with work in major collections including the Los Angeles County Museum of Art, Philadelphia Museum of Art, and the Museum of Modern Art in Rio de Janeiro, Brazil. She had residencies at the MacDowell Colony, the Visual Studies Workshop, and the Atlantic Center for the Arts. Awards include a grant from the Lomax Family Foundation, an Individual Artist Grant from the Rhode Island state Council on the Arts, an Independence Foundation Fellowship in the Arts, a Mid-Atlantic Arts Foundation Artist as Catalyst Grant, a grant from WYBE Public Television, a Philadelphia Stories New Program Grant, and a Fleisher Challenge Artist Exhibition. In 2013, Critical Mass listed her as one of the top 50 photographers in the US. In 2015, she presented The Fourth Grade Project as a TEDx talk. Her work has been featured in Ms. Magazine; Vision Magazine, Beijing, China; Camerawork; New Art Examiner; Artweek, and Photography Now.