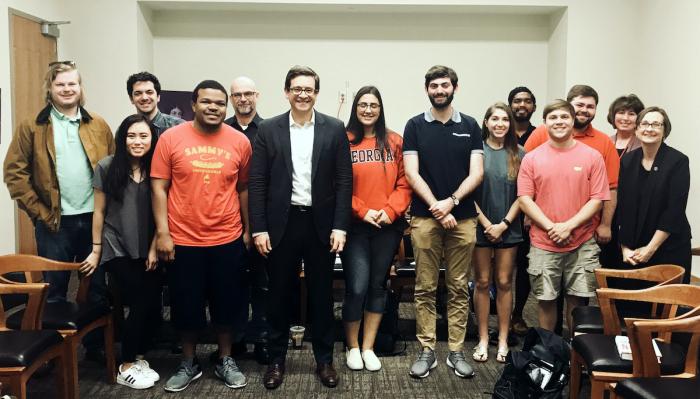 The Richard B. Russell Library for Political Research and Studies participates annually in Congress Week—an initiative of the Association of Centers for the Study of Congress. The goal of Congress Week is to foster public interest in the U.S. House of Representatives and Senate, promote appreciation for the legislative branch’s role in a representative democracy, and bolster wider engagement in American civic and political life.

As part of its Congress Week celebration, the Russell Library presents Civic Knowledge = Civic Power. A slate of public programming features informal “lunch-and-learn” talks presented by University of Georgia faculty and a keynote lecture by a nationally recognized scholar, journalist, or public official. The goal of Civic Knowledge = Civic Power is to encourage members of the University of Georgia and Athens communities to learn more about the inner workings of Congress as well as the critical role it plays in American politics.

The Richard B. Russell Library for Political Research and Studies is a founding member of the ACSC.

For questions about Congress Week, contact Dr. Ashton Ellett at ellettag@uga.edu or 706-542-6793.

2019: Heather Cox Richardson, Boston College, “Government Shutdowns and Partisan Risk: What We Can Learn from the Forgotten Debacle of 1879”