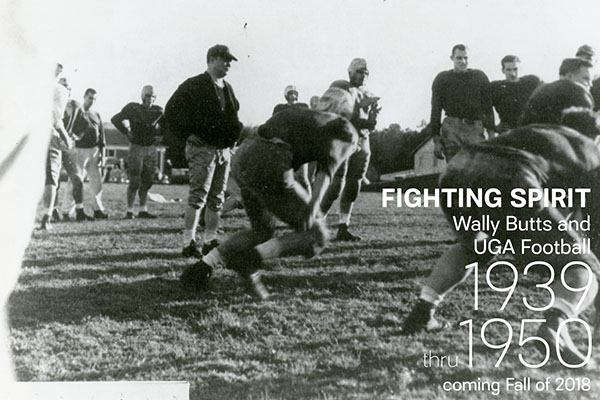 Athens, Ga. -- As players and fans prepare for the start of a new football season, the Hargrett Rare Book and Manuscript Library invites them to look back at seasons past in the new exhibit “Fighting Spirit: Wally Butts and UGA Football, 1939-1950.” Opening Friday, Aug. 31 in the Rotunda Gallery of the Richard B. Russell Building Special Collections Libraries, the display will explore the team during the tumultuous years surrounding World War II.

Each fall Jason Hasty, the Hargrett Library’s UGA athletics history specialist, curates an exhibit that explores the University of Georgia’s athletics program. “Fighting Spirit” uses photographs, textiles, and other historic material drawn from the UGA Athletic Association collection to tell the story of Wally Butts, the coach who built a program and guided it to the pinnacle of success only to see his team dismantled by the needs of war.

“The story of Georgia’s first trip to the Rose Bowl in 1943 is well-known,” said Hasty, “but what’s talked about less often is that this championship team ceased to exist as soon as that game ended. When many of his best players enlisted or were drafted into service, Coach Butts had to guide the program through the war years and then rebuild the team with returning GIs.”

The story of Walter Ruark, co-captain for the 1942 season, gives voice to the many players who gave their all on the football field and the battlefield. “Ruark was a phenomenal player on that team, but then he entered the service and never made it back home,” said Hasty. Walter Ruark’s Rose Bowl uniform, on loan from his daughter, Pat Fleming of Clarkesville, will serve as a centerpiece in the exhibit.

“Fighting Spirit” will be on display in the Rotunda Gallery of the Richard B. Russell Building Special Collections Libraries, 300 S. Hull Street. Curator led tours of the exhibit will take place each Friday before home football games, starting at 3 p.m. No prior registration for tours is required. The Special Collections building is free and open to the public from 8 a.m. to 5 p.m. Monday through Friday, and 1-5 p.m. on Saturdays. The building is closed on home football game days.