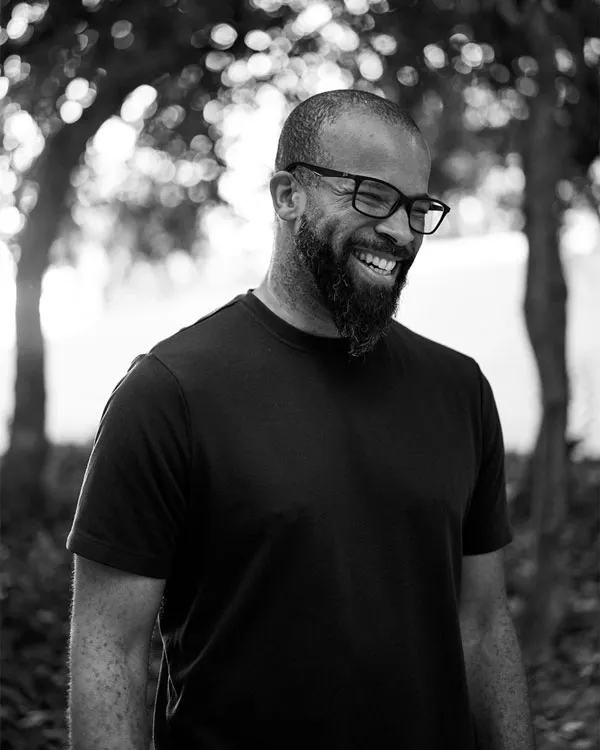 Douglas Kearney is a poet, performer, and librettist who has published seven books that bridge thematic concerns such as politics, African-American culture, masks, the Trickster figure, and contemporary music. His most recent book, Sho (Wave Books, 2021), was the winner for the 2022 Griffin Poetry Prize, the 2022 Minnesota Book Award for Poetry, and was a finalist for the National Book Award, the PEN/Voelcker Award, and the Kingsley Tufts Award. Navigating the complex penetrability of language, the poems in this collection are sonic in their espousal of Black vernacular strategies, while examining histories and current events through the lyric, brand new dances, and other performances.

Kearney is also the author of Buck Studies (Fence Books, 2016), which was awarded the CLMP Firecracker Award for Poetry, the Theodore Roethke Memorial Poetry Award, and the silver medal for the California Book Award in Poetry. BOMB says Buck Studies “remaps the 20th century in a project that is both lyrical and epic, personal and historical.” Kearney describes the non-traditional layout of his poems as “performative typography.” On the relationship between his poetry and politics, he notes: “For me, the political is a part of how I see the world. My art making doesn’t begin without realizing who I am and what it means for me to be writing a poem and not doing something else.” Kearney’s collection of writing on poetics and performativity, Mess and Mess and (Noemi Press, 2015), is a Small Press Distribution Handpicked Selection. In it, Kearney writes, “If my writing makes a mess of things, it’s not to flee understanding, but to map (mis-)understanding as a verb.” Patter (Red Hen Press, 2014), Kearney’s third poetry collection, examines miscarriage, infertility, and parenthood. The Black Automaton (Fence Books, 2009) is a National Poetry Series selection, which “flows from a consideration of urban speech, negro spontaneity and book learning.” Someone Took They Tongues (Subito Press, 2016) collects several of Kearney’s libretti, including one written in a counterfeit Afro-diasporic language. He was the guest editor for the 2015 Best American Experimental Writing.

Kearney has received a Whiting Writer’s Award and the Cy Twombly Award for Poetry, and was named a Notable New American Poet by the Poetry Society of America, He has been awarded fellowships from Cave Canem and The Rauschenberg Foundation. His work has appeared in a number of journals, including Poetry, Iowa Review, Boston Review, and Indiana Review, and anthologies, including Resisting Arrest: Poems to Stretch the Sky, Best American Poetry, Best American Experimental Writing, and What I Say: Innovative Poetry by Black Poets in America.

A Howard University and CalArts alum, Kearney is a McKnight Presidential Fellow and associate professor of Creative Writing/English at the University of Minnesota–Twin Cities. Born in Brooklyn, raised in Altadena, CA, he lives in St. Paul with his family.

This program is co-sponsored by the UGA English Department, The Georgia Review, and the Willson Center for Humanities and Art.