War of Words: Propaganda of World War I

World War I (1914-1918) was different than any previous war. It was a total war that required all members of the nation to be involved in the war effort. All of the resources of the state were mobilized for war. Ultimately, 65,000,000 soldiers from 30 countries fought in World War I and tens of millions citizens across the world would be involved in the conflict one way or another. 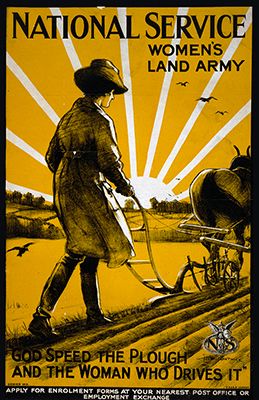 Between 1914 and 1918, war propaganda was virtually unavoidable. It came in many different forms, including posters, pamphlets and leaflets, magazine articles and advertisements, short films and speeches, and door-to-door campaigning. Print propaganda blanketed the nation, in both rural and urban areas, covering walls, windows, taxis and kiosks. In Britain, for example, the Parliamentary Recruiting Committee published and distributed almost 12 million copies of 140 different posters, 34 million leaflets, and 5.5 million pamphlets by the second year of the war. By the time of the armistice in November 1918, the American government had produced more than 20 million copies of some 2,500 distinct poster designs.

Propaganda often incorporated national symbols and figures that drew on each nation’s history of and mythology. Propaganda also employed depictions of the enemy to scare citizens into action and strengthen national resolve. These images were also used to justify the war, recruit men to fight, and raise war loans. A successful poster allowed for only one interpretation.

One of many purposes of propaganda was recruiting men for military service. Great Britain and the United States used propaganda to raise troops, often appealing to men’s notions of courage and duty. Recruitment propaganda also reinforced traditional gender roles, reminding men that it was their job to protect the women and children. However, once the draft was implemented in these nations, propaganda focused on other causes, such as boosting morale among soldiers and civilians.

However, for most nations involved in the fighting, this was not necessary as they already had universal conscription. Rather these countries, like France and Germany, used their propaganda to appeal to other nations to join their cause and to boost morale.