Lee Karen Stow, a UK documentary photographer, will speak on her "Poppies" project Nov. 12 at 6 pm at the Russell Special Collections Libraries.

“Poppies: Women, War, Peace” remembers women in times of war, from the First World War to the present day. It combines a portrait series of women whose lives have been affected by war with a botanical series of the red ‘Flanders Fields’ poppy. For the red poppy, despite its delicate appearance, is able to generate new life when everything else has been destroyed. 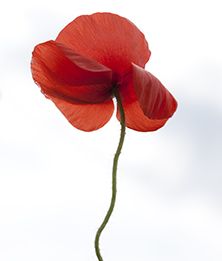 A reception will follow Stow's talk. The exhibit will be on display through Dec. 14.

Part of the observance to mark the centennial end of the First World War, the exhibit also pays homage to Moïna Belle Michael, originally from Monroe, who was instrumental in ensuring the red poppy flower became a symbol to remember the victims and veterans of war. Michael was inspired in her quest by the war poem ‘In Flanders Field’ written by Lieutenant Colonel John Alexander McCrae in 1915.

The story of Michael’s relentless, lifelong remembrance campaign is largely forgotten. Each year thousands of women suffer as a result of war, their stories lost behind the bigger stories from the battlefields.

“’Poppies: Women, War, Peace’ is not an attempt to cover every conflict,” Stow said. “My research and my portraits, initially inspired by Moïna Belle Michael’s vision, grew organically as women and their stories entered into my own awakening. I wasn’t aware for instance of my own mother’s traumatic childhood during the five-year bombing blitz of our home city Hull, England, during the Second World War. ‘You never told me,’ I said. ‘You never asked,’ she replied. I began to ask more.’”

The talk is co-sponsored by the Willson Center for Humanities and Arts, the Lucy Hargrett Draper Center and Archives for the Study of the Rights of Women in History and Law, and the UGA  Institute for Women's Studies.