An extraordinary educator who took over operations of the family farm after his father 's death, Andrew Avery helped create the Decatur County Peanutorama, highlighting the crop and the surrounding county's contribution to its marketing.

Avery’s family has donated his papers to the University of Georgia Hargrett Rare Book and Manuscript Library, including correspondence, photographs, printed material, notes, legal documents, plats, and various ephemera.  Of note is the scrapbook documenting farm improvements he made for the Atlanta Constitution's Plant-to-Prosper contest of 1938, which he won, as well as many photographs of schools he was involved with in southwest Georgia.

Andrew Avery  (1901-1990) attended Young Harris College, graduating in 1927, and the University of Georgia, graduating in 1929. He taught in Whigham, Hahira, and Mt. Pleasant before being elected Decatur County Superintendent of Schools, serving from 1932-1948, then ran for a seat in the state senate in 1948.

Andrew Avery was recognized as making unusual and extraordinary contributions to public education in Georgia.  In addition to serving the boys and girls of Decatur County, Mr. Avery was active in state and national education activities.  He spearheaded the drive for free textbooks and rural library services in Georgia. In 1938, M. D. Collins, Georgia state superintendent of schools, presented Mr. Avery to the annual meeting of the National Education Association as the "man who has given free textbooks to the children of Georgia and library service to the rural children.”

“Daddy’s recognition by the state superintendent of schools as the one who spearheaded the drive for the legislation that provided free text books in all Georgia schools is partially evidenced by papers in the collection,” said son Daniel Avery.  “The collection contains the original surveys sent to and returned to daddy by county and city school superintendents in Georgia. The original summary of this survey is in the collection and was used to support his efforts in his work with legislators.”

Previously the Averys donated a collection of home movies to UGA’s Brown Media Archives and Peabody Awards Collection. The films picture scenes of South Georgia and elsewhere from the 1930s to mid-1950s. Over the years he made several films about Decatur County for historic and educational purposes, and to promote local agribusiness. 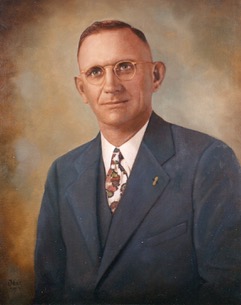 Avery produced a short film called "Footsteps of Progress in the Flint River Valley" that is a compilation of silent footage he shot in black & white and color. The film features agriculture, education, business, and religion in Decatur County and Southwest Georgia.  Avery pushed hard for the peanut business in Georgia and gave away bags of peanuts constantly until his death.

Avery was a Baptist his entire life and was a longtime member of Mt. Pleasant Baptist Church. This church appears in his footage along with every other church in the county and the Temple located in Bainbridge. He was also an active member of the Gideons and according to his obituary gave out almost as many bibles as he did peanuts.

Also included in the amateur footage is a hospital built in Bainbridge by African American physician Dr. Joseph Howard Griffin. Under the Knife, written by Dr. Griffin's great-nephew Hugh Pearson, explores how a black physician managed to wield so much power in pre-Civil Rights movement in the south. Dr. Griffin built a small hospital for blacks in the 1930s and in the early 1950s built a larger hospital with $250,000 of his own money.

“We appreciate Mr. Avery donating his father’s papers, which complement and expand on the rich materials found in his home movies,” said Katherine Stein, Hargrett director. “The additional materials enhance the research value and will be a resource in numerous disciplines.”

For more information about the Avery collections: