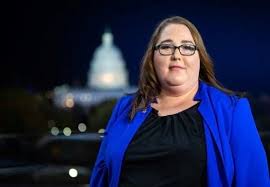 Political analyst and elections forecaster extraordinaire Dr. Rachel Bitecofer will discuss her innovative election models and the potential outcome of the 2020 elections. A Senior Fellow at the Niskanen Center, Bitecofer is Assistant Director of the Wason Center for Public Policy at Christopher Newport University. She is the author of The Unprecedented 2016 Presidential Election (Palgrave Macmillan, 2017). She has contributed pieces for POLITICO, The Guardian, New Republic, New York Times, and Washington Post and is a contracted contributor for CBC Radio. Bitecofer has also made television appearances on CNN, MSNBC, and HBO’s Real Time with Bill Maher.

Bitecofer received her doctoral degree in political science from the University of Georgia’s School of Public and International Affairs in 2015.